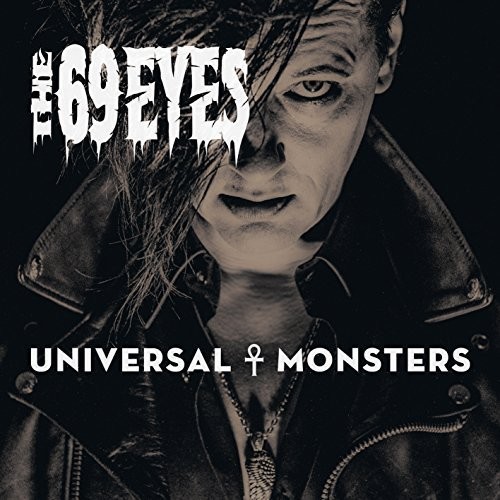 2016 release, the 12th album from the Helsinki, Finland-based band. The 69 Eyes have become one of the most well-known bands in the world who blend a death/goth rock aesthetic and mood with genuinely memorable melodic rock songs. Producer Johnny Lee Michaels teamed-up with The 69 Eyes in the final months before the Millennium and together they developed the band's 'goth 'n' roll' signature sound on the albums Blessed Be (2000) and Paris Kills (2002). After over a decade the band has finally got it's 6th vampire back and is now releasing Universal Monsters on Nuclear Blast Records. Universal Monsters has already been said to sound like an album that could have come out right after Paris Kills. Yet it's as mysterious and surprising as The 69 Eyes have always been. Epic songs like 'Blackbird Pie' combining celtic melodies with Ennio Morricone-ish string arrangements, Native American flute and singing together in the way music was once done and the west was won... or strange French-new wave rock with the chorus of 'Miss Pastis'... or a Jim Morrison-esque mystic postcard from 'Jerusalem'..."Nobody makes music like we do, man! This is our life, this is what we believe in," says vocalist Jyrki 69.