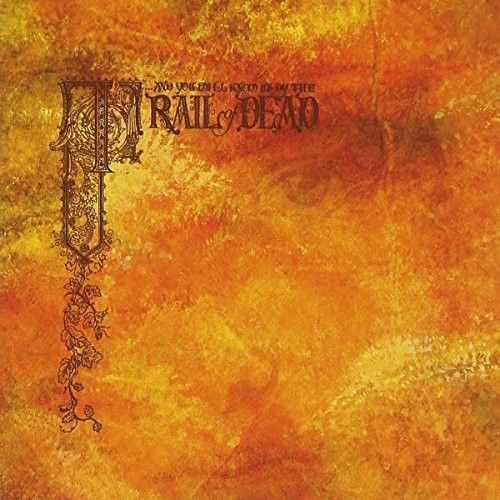 Source Tags & Codes: Expanded 15th Anniversary Edition [2LP]
Artist: ...And You Will Know Us By The Trail Of Dead
Format: Vinyl
New: Not in stock
Wish

… And You Will Know Us By The Trail Of Dead’s landmark album, Source Tags & Codes, will be released as an expanded vinyl edition on August 11 via Interscope/UMe to commemorate its 15th anniversary. Housed in a gatefold sleeve, the album, will be pressed on black vinyl as a double LP for the first time ever and include three tracks previously only available on various rare and international releases (“Invocation,” “Life Is Elsewhere,” and “Blood Rites”). The back cover will be a replica of the Japanese version which features a drawing of a teenage boy while the iconic image of a cackling Henry Miller from the compact disc and North American back cover will be represented with a unique etching on Side D of the second LP.

Few albums in 2002 were as highly anticipated as Trail of Dead’s major label debut, Source Tags & Codes, which saw the band making the leap from venerable indie Merge Records to Interscope. Having already amassed a rabid fanbase off the strength of two acclaimed albums and their legendary, nihilistic live shows, the Austin, Texas-based band – fronted by dual vocal powerhouses and multi-instrumentalists Conrad Keely and Jason Reece and rounded out with Neil Busch and Kevin Allen – had many waiting with baited breath to see what their move to the majors would produce. Armed with the biggest recording budget of their career, the band teamed back up with producer Mike McCarthy who helmed their sophomore album, Madonna, and secluded themselves at Prairie Sun Recording Studio, in Cotati, Calif., a sleepy town located north of San Francisco in Sonoma County wine country. Free from financial and time constraints and the distractions of home they were able to focus, experiment and fully realize their distinctive sound.

“Source Tags & Codes was our moment to take a stab at creating a timeless album,” says founding member Reece. “We had the chance to have that freedom to experiment with new sonic possibilities while messing with the major label paradigm. It was truly a chaotic, strange and beautiful time in our young lives.”

Upon release on February 26, 2002, Source Tags & Codes thrust the band into the mainstream spotlight as it was met with glowing reviews from critics and fans alike who hailed the album as a masterpiece, lauding the band’s uncanny ability to create something at once beautiful and brutal, raw and refined. Pitchfork awarded the album a perfect 10 rating, putting it the rarefied company of such classic records as Radiohead’s OK Computer and Wilco’s Yankee Hotel Foxtrot. Writer Matt LeMay proclaimed: “Dense, beautiful, intricate, haunting, explosive, and dangerous, this is everything rock music aspires to be: intense, incredible songs arranged perfectly and performed with skill and passion. Source Tags & Codes will take you in, rip you to shreds, piece you together, lick your wounds clean, and send you back into the world with a concurrent sense of loss and hope. And you will never, ever be the same.” Entertainment Weekly declared, “Hardcore punk outbursts alternate with art-rock feedback flights and dreamy bits of melody that somehow fuse into a coherent, often spectacular album,” while NME remarked, “Accordingly, Source Tags & Codes comes with an albatross-like weight of expectation round its skinny neck – yet happily, it’s supported by a band who have grown to match it,” adding, “their smash-and-grab dynamic manages the neat trick of sounding simultaneously untutored and highly focused, following new twisted threads out from the early-90s underground labyrinth.” In its “A” review, The Onion’s AV Club wrote, “When …And You Will Know Us By The Trail Of Dead wraps the project with the clanging title track, with its images of ‘the ruined landscapes that I once called home,’ it’s concluded more than just a collection of songs. It’s provided an experience.”

The 15th anniversary vinyl edition provides fans an opportunity to hear the album with the addition of 3 tracks previously not included on the US release. The plaintive piano piece “Invocation” gently begins the LP before shifting into the driving “It Was There That I Saw You,” providing a unique alternate beginning. The sparse instrumental “Life Is Elsewhere” serves as an intermission to the first act and evokes feudal Japan with its sound effects and Japanese dialog. The pummeling “Blood Rites” follows the title track and closes things out with orchestral strings that give way to a piercing guitar, Keely’s blood curdling scream and the band’s controlled sonic chaos.

A decade and a half later Source Tags & Codes has stood the test of time and sounds as urgent, challenging, enthralling and explosive as Trail Of Dead’s influential opus did when first released. In recent years, retrospective reviews have continued to heap on the praise with Pitchfork including it in their “Top 200 Albums Of The 2000s,” the BBC calling it “one of the finest rock albums of recent history,” and XPN hailing it as “an unparalleled masterpiece of its time, an unbloated orchestral record during a time when punk bands weren’t supposed to be so worldly or indulgent.”