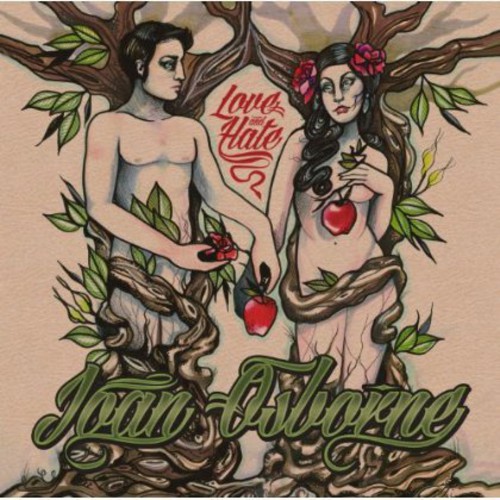 This one feels a little different, Joan Osborne says of her new release Love and Hate. In addition to being the beloved singer-songwriter and seven time Grammy nominees eighth studio album and her eOne debut, the 12 song set is one of the most personally charged, creatively ambitious efforts of her two-decades-plus recording career.

While Osborne has already earned a reputation as both a commanding, passionate performer and a frank, emotionally evocative songwriter, her soulful song craft reaches a new level of musical and lyrical resonance on Love and Hate. Such insightful, emotionally complex new compositions as Where We Start, Work On Me, Kittens Got Claws, Keep It Underground and the pointed title track survey some of the more complicated terrain of romantic relationships, in a manner thats rarely been attempted in popular music, while the albums intimate, stripped-down sound marks a stylistic departure from the gritty blues-based rock for which Osborne is best known.

I feel like each song on this album talks about a different aspect of love, she says. She continues: Love isn't just one thing; it encompasses faith, passion, power struggles, humor, anguish, spirituality, lust, anger, everything on that spectrum. The people we love can bring out the very best and the absolute worst in us, because the leap that you make in trusting another person makes you vulnerable. When the endorphin rush of falling in love stops, that's when the difficult work comes in. So I tried to come up with songs that were about different aspects of this continuum.

Love and Hate is the product of an extended birth cycle that spanned no less than seven years a period during which Osborne released two other albums and worked on an assortment of other musical projects. She and co producer/guitarist Jack Petruzzelli with whom she also recorded 2012s Bring It On Home, which was nominated for a Grammy in the Best Blues Album category had initially intended to make a lush, pastoral album in the mold of Van Morrisons Astral Weeks or Nick Drake's Pink Moon. But as she continued to write songs for the project, Osborne found herself drawn towards more personal subject matter.