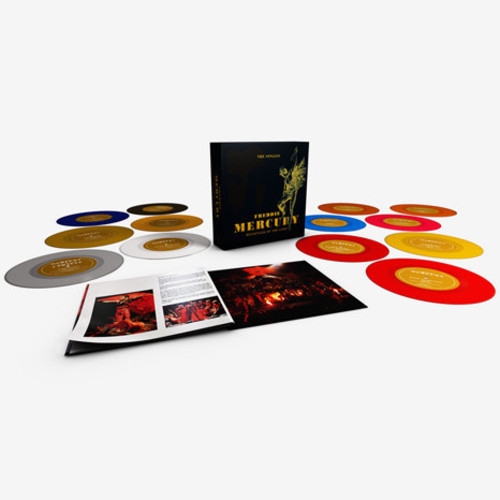 Freddie Mercury was a man of many talents and many different sides. The songs he wrote for and with Queen filled stadiums around the globe and have rightly gone down in history, but he also embarked on a solo career that took him from the clubs of Munich and New York to the great opera houses of the world. He was the ultimate showman, but he kept his private life away from the prying eyes of the media; a larger than life rock star who loved disco, classical music and ballet. He was a restless spirit, a true chameleon who reveled in his own contradictions.

All the different sides of this iconic musician can be found on Freddie Mercury: Messenger Of The Gods The Singles. Fittingly released on Mercury Records for the world outside North America, and on Hollywood Records in North America, this box set brings together all 13 of Freddie s solo singles on individually colored vinyl.

From his debut solo single I Can Hear Music, released under the name Larry Lurex, through the dance floor-influenced solo anthems of the 80s and up to his collaborations with legendary Spanish opera singer Montserrat Caballé including the timeless Barcelona, this is a journey through the career of a unique talent.

Messenger Of The Gods is completed by two posthumous singles, In My Defence and Living On My Own (No More Brothers Radio Mix), the latter of which became Freddie s first solo number 1 and was the biggest selling European single of the year in 1993.

Had he lived, it is anyone s guess where this most restless and protean of singer s muses would have taken him. But Messenger Of The Gods The Singles is a towering legacy, a collection of songs which will never lose their stature of classics and will live on forever.

Freddie Mercury: Messenger Of The Gods The Singles is released as a box set featuring 13 x 7 singles on colored vinyl with a booklet featuring photos, some of which are previously unpublished, and text.


Freddie Mercury: Messenger Of The Gods The Singles will also be available on 2CD with a 20-page booklet and as a digital album.